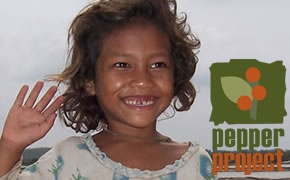 Tom Gordon’s and Cris Petersen’s The Pepper Project promotes U.S. importation of fine Kampot pepper as a way to support Cambodians and the country’s economy. It’s a great pepper that was used in the finest French restaurants during the colonial era.

They have partnered with Expedia to organize and host The Pepper Project’s Insider’s Tour of Cambodia in late February of 2016. It is 13 days of high adventure from insiders who really know the relatively unexplored territory.

Highlights include a chef’s dinner at Charcoal restaurant in Siem Reap where the cocktails are mixed tableside as well as many of the specialty dishes prepared & served at the table. Also included is a carefully curated tasting tour of the best of local street food transported in tuk tucks.

We’ll get the inside information from Tom Gordon.