The happiest of Happy Holidays to all of our listeners and we’re back live with a fresh show (that’s sure to please) on December 26th, 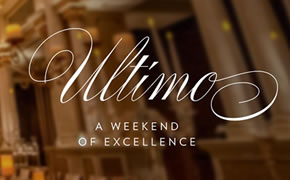 Guest Host Chef Andrew Gruel and Executive Producer and Co-Host Andy Harris are in fabulous Las Vegas for the Team USA 2017 Selection for The Bocuse d’Or, the world’s most rigorous international culinary competition. This is all part of ULTIMO, a lavish weekend of culinary events at The Venetian and The Palazzo.

Team USA is guided and funded by the ment’or BKB Foundation that inspires excellence in young culinary professionals. The President is Thomas Keller (The French Laundry, Per Se, Bouchon and Bouchon Bakery.) The day-to-day operations of ment’or BKB are overseen by Young Yun, the Executive Director. Young is with us to profile the good works of ment’or BKB and explain what’s in store for the future.

Earlier in the year Chef Philip Tessier (ex-French Laundry) led Team USA to the Silver Trophy at the Bocuse d’Or in Lyon. This is the highest ranking ever for Team USA. For 2017 Chef Tessier is Head Coach for Team USA and was a judge this week for the Team USA 2017 National Selection. Chef Phil is our guest. 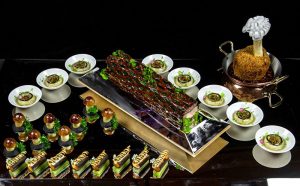 It was an intense competition to select Team USA 2017. It was a four hour and 35 minute marathon for each team. There was a separate judging panel for the fish dish and the meat platter. The Chef Jury members’ decision was for Chef Mathew Peters, Executive Sous Chef, Per Se, NYC. His commis is Harrison Turone. Chef Mathew will lead Team USA for 2017 and train intensively for the next year! Chef Mathew Peters joins us.

Chef James Kent led Team USA 2011 for the Bocuse d’Or. He’s a Competition Captain for Team USA 2017 and a member of the ment’or BKB Culinary Council. Chef Kent is the Executive Chef of the acclaimed NoMad in New York City. We’ll meet him.

Chef Andrew and Producer Andy have been doing some dining in Las Vegas. Chef Andrew shares some of his Strip favorites and Andy provides his views on two spots within The Venetian and Palazzo.

Memento Mori winery (Napa Valley) is one of the small, exclusive cult boutique producers showcased at Ultimo Weekend. Their 100 per cent Cabernet Sauvignon was poured at the Ultimo Grand Banquet. The Winery’s premium Cabernet grapes come from highly regarded vineyards in St. Helena and Oakville. Co-founder Adam Craun is our guest. As always there is an intriguing story here…

We’re broadcasting from Lagasse’s Stadium at The Palazzo. The chef de cuisine here is Scott Pajak. We’ll visit with Chef Scott and learn why this isn’t you average sports bar and is actually a preferred destination for discerning Las Vegas locals as well as visitors.

Airing the show from Las Vegas at Lagasse’s Stadium at The Palazzo requires the support of dozens of individuals. An extra special tip of the toque to The Venetian and The Palazzo (Sebastien Silvestri, Vice President, Food & Beverage and Claudine Grant, Public Relations Manager) and ment’or BKB Foundation (Young Yun, Executive Director and Jaimie Chew, Director of Communications & Events.)