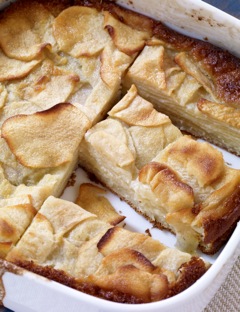 Dorie is on a mission to encourage Home Bakers in their kitchens. Her gateway recipe which she suggests a starting home baker tackles first is her foolproof “Custardy Apple Squares.” The ingredients are typically already in the home pantry. The recipe is now available for the taking via the “Blog” tab accessible from the Home Page of the “SoCal Restaurant Show’s” Website.

Dorie observes about BAKING CHEZ MOI, “Over the years, as the recipes and stories accumulated, as I made the cakes and cookies, tarts, pastries, and desserts in France, remade them in America, and shared them with friends on both sides of the ocean, I realized that though I hadn’t written the book I’d originally set out to, I’d written one that taught me just as much.”

“In 2006 Dorie’s Baking From My Home to yours was published. Shortly after the book was available an online baking club, Tuesdays with Dorie, was formed so that members could bake their way through the book and learn from it and each other. The group finished the book’s 300 plus recipes and is now deep into Baking with Julia.”

“Around My French Table is filled with stories of French life and more than 300 recipes for the elbows-on-the-table food that my friends and I are making in France today. Another online group, French Fridays with Dorie, was formed and the members – they come from all over the world – are cooking like mad. Soon they will be baking their way through BAKING CHEZ MOI”