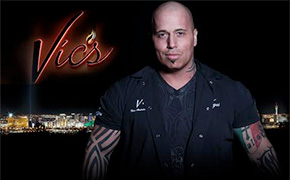 He’s now hosting (along with Laila Ali) “Late Nite Chef Fight” on FYI on Saturdays at 10:00 p.m. Based on the real after hours’ chef competition (originally created by local culinary personality Jolenne Mannina) that takes place in Las Vegas, each episode of “Late Nite Chef Fight” has two leading, Vegas-based chefs competing against each other in a food truck they have never stepped foot inside before.

Using a diverse and exotic range of unfamiliar ingredients left behind in the food trucks, the chefs create three unique dishes in three fast-paced rounds.

For each finale the dishes are judged by two rotating celebrity chef judges. In addition, Jolenne Mannina leads a panel of two regular folks. Their consensus on the two competing dishes gets a full vote in the final decision of the winning chef.

Vic Vegas, a self-taught restaurant chef, worked his way up the culinary ladder from dishwasher to Executive Chef at several Las Vegas hotels including Rumor, Hard Rock Hotel and The Sahara House of Lords to mention just a few.