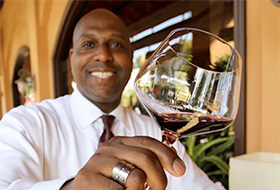 At The Golden Foodie Awards this year The Winery took home the honor for “Best Wine List” for the third year in a row. Also in the Orange County Register’s restaurant critic Brad A. Johnson’s 2014 O.C. Restaurant Awards the new Winery in Newport Beach was in Johnson’s “Top 10 New Restaurants” (in the Number Three position.)

The Winery’s Managing Partner and Sommelier, “Sir” William Lewis, joins us to share all the good news and their celebratory plans for New Year’s Eve.