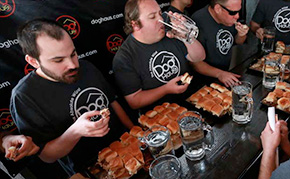 The slider eating competition at Dog Haus Biergarten (gourmet hot dog concept) in Old Pasadena on Saturday, January 10th will kick off the community’s fourth annual Cheeseburger Week (January 11th to 16th) with a challenge for their fans. Ten competitors, selected through qualifying rounds held at each Dog Haus location during the month of December and early January will face off to see who can eat the most Dog Haus sliders in six minutes. Last year the victor consumed 38 sliders in 6 minutes!

There is historical documentation tracing the probable origin of the cheeseburger (putting cheese on a burger) to a café Pasadena in 1924.

Dog Haus is Southern California’s craft casual hot dog concept with a passion for creativity quality and commitment to community. The first Dog Haus opened in Pasadena in 2010 offering signature 100 per cent all-beef skinless Haus dogs, Haus Sausages and natural Angus beef burgers on grilled King’s Hawaiian Rolls. Guests can customize their own creations, too, choosing from a selection of more than 40 quality toppings.