Producer and Co-Host Andy Harris is going solo in the host chair this morning. Now a preview of today’s highly caloric (but virtually guilt-free) show 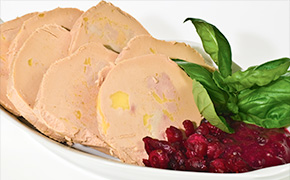 Foie gras, a fine-dining delicacy, has been missed in California restaurants since 2012. A Federal judicial ruling now permits foie gras produced outside of California to be served in restaurants again. We’ll have a tantalizing update with Chef Kris Morningstar of Terrine in Los Angeles…On Monday, Jan. 12th he served a special multi-course “Welcome Back” foie gras menu starting with a foie gras terrine.

The first West Coast outpost of New York’s beloved burger, hot dog and frozen custard stand, Shake Shack, launched in Las Vegas at the end of last year. Shake Shack has a passionate, cult following in the East mirroring the affection Californians have for In -N-Out Burger. It’s located on The Strip in a highly visible spot adjacent to The Park at the foot of New York-New York Hotel & Casino. Mark Rosati, Shake Shack’s Culinary Director, is with us serving up all the juicy details.

Chef Philip Tessier and his young Commis, Skylar Stover, of Thomas Keller’s The French Laundry in Yountville, CA are going for the gold in 2015. The pair is the newest Bocuse d’Or USA Team, representing the nation at the World Cooking Contest in Lyon, France on January 27th and 28th. Often described as the “Culinary Olympics,” the Bocuse d’Or (staged every other year) is among the most demanding international cooking competitions, pitting chefs from twenty-four countries against one another in an intense five and a half hour, two-part cooking challenge in front of thousands of cheering fans. Team USA joins us on the road to Lyon.

Chef Neal Fraser (bld and Fritzi Dog) and his wife and business partner, Amy Knoll Fraser, have had their eye on Downtown Los Angeles since before they closed Grace in the Fairfax District in 2009. Their first move was to become one of the official caterers for Vibiana, the home of L.A.’s former historic Catholic Cathedral (Cathedral of Saint Vibiana) dating back to 1876 and now a busy special events space. Eventually they moved their catering kitchen to the site and became the official solo caterers for the facility. Redbird (a partnership with restaurateur Bill Chait) is their new, eagerly anticipated “New American” fine-dining space located on one floor of the former Rectory building (built in the late 1930s.) Amy Knoll Fraser is our guest.

First-time cookbook authors and cookware experts Logan Levant (ex- Buttercake Bakery) and Hilary Hattenbach have penned The Kitchen Decoded – Tools, Tricks, and Recipes for Great Food. The handy new book unravels the mystery of home kitchen equipment and saves the home cook countless hours. The Kitchen Decoded takes the mystery and intimidation out of gadgets and shows how proper cookware can actually streamline the cooking process. Co-author Logan Levant is our helpful guide.

Members of Chef Michael Puglisi’s immediate family in Sicily are well-known Old World artisan butchers. Very soon Chef Puglisi will be using those skills at his own Electric City Butcher Shop which is a major component of Santa Ana’s much –anticipated (and talked about) 4th Street Market food emporium. Puglisi was previously the sous chef of Thomas Keller’s Bouchon Beverly Hills. On Friday, January 16th Chef Puglisi is hosting an elaborate, multi-course pop-up dinner at Playground 2.0, an intimate 17-seat exhibition culinary theater in Santa Ana steps away from the soon-to-be 4th Street Market.