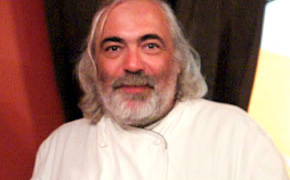 You can see him every Wednesday morning shopping at The Santa Monica Farmers Market where he is a long-time and familiar fixture. Giraud arrived in Los Angeles in 1988 and joined Michel Richard at Citrus as Chef de Cuisine. Together they elevated Citrus to the ranks of the country’s most celebrated restaurants.

Foie gras is back on the menu at Maison Giraud.

Chef Alain Giraud is our guest.