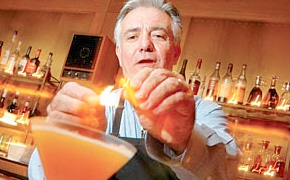 The Museum of the American Cocktail (MOTAC), Golden State of Cocktails, and Dewar’s present “King Cocktail in Story and Song: Dale DeGroff in Conversation with Philip Dobard,” a very special edition of Touring the Cocktail: MOTAC Los Angeles. The presentation is set for Wednesday evening, January 28th at 6:30 p.m. at Casey’s Irish Pub in Downtown Los Angeles.

Dale DeGroff is a central figure in the craft cocktail revolution of the last 25 years. Hear how Dale became “King Cocktail,” how he went from L.A’s Hotel Bel-Air to New York’s Rainbow Room, why he and a group of like-minded craft cocktail pioneers established MOTAC, and colorful tales of events along the way.

Philip Dobard is Vice President of the SoFAB Institute, home of The Museum of the American Cocktail.

This program encores in New Orleans at The Museum of The American Cocktail on February 5th.

Both Dale DeGroff and Philip Dobard join us to preview the intriguing “King Cocktail in Story and Song.”