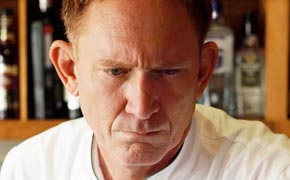 Chef Mark Peel was the founding executive chef of the landmark Campanile in Hollywood which closed in 2012 after a long run. He was also the opening chef for Wolfgang Puck’s original Spago in West Hollywood.

Now, after the announcement of Bombo, Peel’s new seafood driven space scheduled to open in March at the iconic Grand Central Market, Chef Peel is giving enthusiasts the chance to get a sneak peak of what tempting new dishes may appear on the restaurant’s debut menu with two additional Pop-Up Dinners at Rascal (known for casual American fare.) Look for the steamed clams and pork sausage with roasted onion, chick peas, lobster broth and flax seed rice.

“Mark is a really wonderful guy, and it has been an amazing experience to have a Chef of his caliber working alongside our very own Chef,” says Rebecca Clark, who Co-owns Rascal with her husband, Sandy. The Clarks’ have both worked in the hospitality industry for a very long time and had met Peel in passing years ago. Peel’s true relationship with Rascal developed when he began frequenting the restaurant with his family, quickly becoming one of their neighborhood regulars.

The final Pop-Up Dinner Menu in this encore series from Chef Mark at Rascal is Tuesday February 3rd from 5:00 p.m. to 10:00 p.m. Reservations are suggested.

Chef Mark Peel is our guest along with Rebecca Clark, the co-owner of Rascal.