Producer and Co-Host Andy Harris is going solo in the host chair this morning. Chef Andrew Gruel of Slapfish is back in the Guest Host seat on February 7th. Now a preview of today’s abundantly overstuffed show. 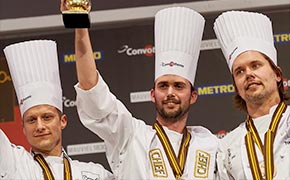 Incredible news from Lyon! For the first time ever Team USA was on the victory stand for the prestigious Bocuse d’Or International Culinary Competition held every other year. Our heartiest congratulations to our victorious Silver Medal winners, Chefs Philip Tessier and Skylar Stover (both of the French Laundry in Yountville.) We’ll be chatting with them live on Feb. 7th upon their return from France.

Lebanon, one of the oldest wine producing regions in the world, is the home to an ancient wine-grape growing area, the Bekaa Valley. The most prominent winery in Lebanon with a hard-earned international reputation is Chateau Musar. Serge Hochar is the larger-than-life personality behind Chateau Musar. Sommelier Christopher Lavin of Broadbent Selections (they represent the winery in the USA) joins us to share the incredible story of Chateau Musar.

What’s Valentine’s Day without some premium chocolates ? Certified Master Chocolatier Amy Jo (Valenza) Pedone of Valenza Chocolatier is with us to satisfy our chocolate craving. Valenza Chocolatier is an authentic Italian inspired Artisan Chocolate and Confections online and wholesale business based in Orange County at The Hood Kitchen Space in Costa Mesa. Their award-winning gourmet Bonbons, Bars and Confections are handmade from the finest local and Italian imported ingredients paired with the purest single bean origin, fair trade chocolate and no added preservatives.

Cookbook author Kristine Kidd was previously the admired food editor at Bon Appetit magazine for 20 years. Her eighth book is Gluten-Free Baking. Her childhood celiac disease resurfaced recently and this book (and the prior Weeknight Gluten Free) are a result of her glorious experimentation in the kitchen. The new book features 80 recipes that are naturally gluten-free and just as tempting and tasty as traditional baked goods.

Chef Mark Peel was the founding executive chef of the landmark Campanile in Hollywood which closed in 2012 after a long run. Now, after the announcement of Bombo, Peel’s new seafood driven space scheduled to open in March at the iconic Grand Central Market, Chef Peel is giving enthusiasts the chance to get a sneak peak of what tempting new dishes may appear on the restaurant’s debut menu with two additional Pop-Up Dinners at Rascal (known for casual American fare.) Chef Mark Peel is our guest along with Rebecca Clark, the co-owner of Rascal.

KFWE (the largest Kosher food & wine festival on the West Coast) is coming to Hollywood at the W Hollywood Hotel on Wednesday evening, February 11th. KFWE Hollywood is the sister event to KFWE London, New York and Miami – bringing world acclaimed wine and spirits to Los Angeles from France, Italy, Spain, Portugal, Israel, Argentina, Chile, New Zealand, Australia and the United States. This exclusive event features a selection of more than 300 wines as well as finely crafted spirits from across the globe. In addition, the evening will spotlight the hottest kosher cuisine on the West Coast from 7 of the most highly regarded Kosher restaurants in Southern California. It promises to be a mouthwatering parade of inspired dishes.