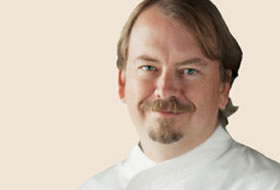 Chef Neal has serious credentials as a fine dining chef who, more recently, has gone casual. Grace (located where John Sedler’s Playa is now) had a healthy run and was well-reviewed. While he was the executive chef at Grace he was one of the few Los Angeles chefs to win a battle on Food Network’s “Iron Chef America.”

Chef Neal’s most recent effort is a gourmet hot dog emporium, FritziDog, located at Los Angeles’ Original Farmers Market at Third & Fairfax. It was a couple of years in the concept and design phase. The guest builds their own dog with a choice of five dogs and four bun choices.

All of the franks are made locally. The source animals are raised humanely, vegetarian fed, and antibiotic free. There are no added nitrates in the hot dogs.

A daytime only version of FritziDog in Downtown will launch in 2013 on the patio of the historic Vibiana Events Center.