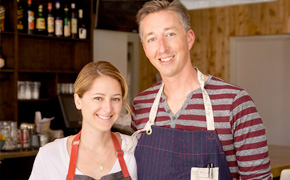 This year’s Food Fare will honor “Top Chef Seattle’s” runner-up cheftestant, Brooke Williamson, and her husband, Nick Roberts, as the 2015 Chefs of the Year and their three restaurants, Playa Provisions, Hudson House, and The Tripel will all be serving at the event.

Chefs Brooke Williamson and Nick Roberts are our guests to provide the 411 on the upcoming Food Fare.