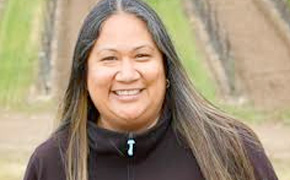 It starts with where the grapes primarily come from – a vineyard situated at the gateway to Santa Barbara County’s renowned Happy Canyon wine region. It’s here at Camp 4 that the soil and climate combine to produce some of the valley’s most sought-after grapes.

At the recent 2015 San Francisco Chronicle Wine Competition Kita was awarded two prestigious Double Golds. One was for the 2012 Pinot Noir Santa Rita Hills Hilliard Bruce and the other for the 2012 Cabernet Sauvignon Santa Ynez Valley Camp 4 Vineyard.

Kita’s winemaker and general manager, Tara Gomez, is our guest. Her winemaking degree is from Fresno State. Tara interned at Fess Parker Winery during her college years and worked grape harvests in Spain before starting the Kita Wines venture in 2010. Previously she was the Enologist at both Fess Parker and, later, J. Lohr Winery in Paso Robles. She also had her own wine label way before starting Kita.