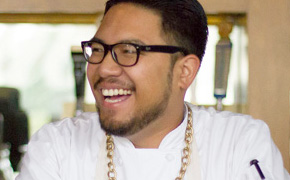 When we last spoke with Executive Chef Jason Montelibano he was making a lot of new friends with his distinctive menu at Chapter One: The Modern Local in downtown Santa Ana. Chef Jason, a native of the Philippines, was named executive chef of EATS Kitchen & Bar, a modern all-day gastropub located at the new Hotel Irvine, when the restaurant opened in December 2013. He also oversees the food at the adjacent Red Bar & Lounge.

Open for breakfast, lunch and dinner, Eats Kitchen & Bar is grounded in affordable prices and destined to be a go-to hangout for locals.