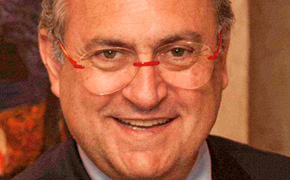 In 1977 veteran restaurateur Antonio Cagnolo (Antonello Ristorante) met Henry Segerstrom for the first time. He was the new assistant manager at the fine-dining Alfredo’s (managed by a German) which was part of what is now the Westin South Coast Plaza. Mr. Segerstrom greatly appreciated Antonio’s gracious Italian hospitality and his innovative table-side service. A friendship blossomed.

A native of Northwestern Italy, Antonio Cagnolo has emerged as a dynamic force in the field of dining having received honor after honor for his many contributions both in and out of culinary circles. Most recently Antonello has debuted its version of an enoteca room (wine library) called the Enoteca Lounge.

Cagnolo also owns several nearby South Coast Plaza establishments that have proven to be favorites of the critics and public, alike. Nello Cucina is located at the entrance of South Coast Plaza north of Bear Street. The Italian restaurant specializes in steaks, pasta and pizza from an authentic brick oven. Across the street, at the center of the bustling South Coast Plaza, sits Quattro Café, a 104-seat dining establishment featuring specialty pasta dishes and entree selections. The casual coffee destination, Antonello Expresso Bar, offers a wide variety of gourmet coffee drinks as well as baked goods and sandwiches.

Antonio Cagnolo joins us to share the story of how Antonello Ristorante came to be at the South Coast Plaza Village in 1979 and other ventures thereafter.