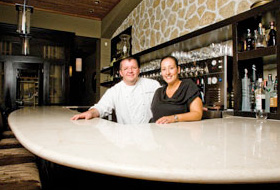 The acclaimed French chef, Florent Marneau, was the opening Executive Chef for Joachim Splichal’s first restaurant in Orange County, Pinot Provence at the Westin South Coast Plaza. He attracted well-deserved raves from the critics. In the mid-2000’s Chef Florent and his wife, Amelia (a talented pastry chef in her own right) were contemplating a restaurant of their own.

Henry and his son, Anton, were fans of Chef Florent from Pinot Provence and doing some memorable private functions for the Segerstrom Family.

Chef Florent is with us to share the story of how Marche Moderne at South Coast Plaza in the Penthouse was born in 2007. It’s unusual for an entrepreneurial husband-and-wife team with modest resources to be given such an incredible opportunity. Their 8th Anniversary is in April.

Marche Moderne, which opened in 2007, has been described as “probably the best bistro in Southern California” in the Los Angeles Times by S. Irene Virbila; was crowned best restaurant in the OC by Orange County Register restaurant Critic Brad A. Johnson; and named in the Los Angeles Times 2014 “101 Best Restaurants” by Pulitzer Prize-winning restaurant journalist Jonathan Gold. The Marneaus combine a passion for market-inspired ingredients and classic French cooking techniques with modern touches at their enduringly popular restaurant.