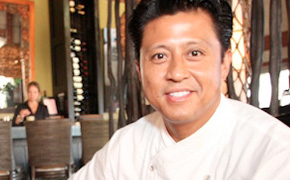 One of the OC’s best and brightest, youthful culinary talents, Chef Louie Jocson, joins us this morning as Guest Host. He’s the new Directory of Culinary Operations for the growing Zov’s family of restaurants. Now a preview of today’s over-stuffed show…

Cochon 555, probably the country’s most talked about culinary competition returns to Los Angeles on March 29, 2015 to celebrate family farms, heritage breed pigs and today’s emerging chef community. Attendees of this one-of-a-kind culinary competition embark on a journey to the new hyper-local culinary landscape, one whole pig at a time. Brady Lowe, the founder of Cochon 555, joins us with the pork-a-licious details.

Spring is here so the time is right to get an overview of the highlights in Spring produce. Our favorite produce savant, Robert Schueller, of Melissa’s World Variety Produce is with us to share what’s fresh from the fields. We’ll be talking about Kale, Kumquats, Rhubarb and Ojai Pixie Tangerines with a few cooking tips added for good measure.

Look who is turning 50 this year! 2015 marks the 50-year legacy of memorable dining at Five Crowns in Corona del Mar. To celebrate, the Lawry’s family and Executive Chef Steve Kling have unveiled a brand new menu and beverage program unlike any other menu this fabled establishment has offered in it’s 50-year history. It’s not your Grandparents’ Five Crowns anymore (although they are still most welcome.) General Manager Jim Colombo (who is also a chef by training) and resident “Mad Bar Scientist Amber” join us with a tempting overview of the enhancements.

Top of the Market located on the Bay in San Diego just South of the USS Midway Museum offers an extensive variety of fresh fish, oysters and shellfish with a sophisticated twists. New executive chef, Ivan Flowers, has only enhanced the already proven concept. Incomparable views of San Diego Bay, Coronado and Point Loma make Top of the Market the ideal location for destination dining while in San Diego. Chef Ivan is our guest highlighting the addition of the new Spring ingredients.

EAT LBC – Long Beach Restaurant Week returns for its big 2nd year from March 22nd to March 28th. One of the participating restaurants is the newly opened Panxa Cocina. It’s in the former Christy’s space on E. Broadway. Chef Arthur Gonzalez (ex-ROE Restaurant) is the Executive Chef and Co-Owner. It’s Santa Fe, New Mexico-style cuisine with rich, bold flavors and a lot of imagination. Chef Art is with us for the menu highlights.

Finally a chance to chat with Guest Host Chef Louie Jocson, the new Director of Culinary Operations for the growing Family of Zov’s restaurants. Chef Louie most recently created the highly regarded Red Table in Huntington Beach, a locals’ favorite. He sold his interest to his former partners to join Zov’s. Earlier in his career he was the Co-Executive Chef of the highly regarded Antonello’s in South Coast Plaza Villagee.

We’re stepping aside for Ducks Hockey on Saturday morning, March 28th. (The Ducks are facing-off against the New York Islanders in Uniondale, Long Island.) We’ll be back, as usual, with the “SoCal Restaurant Show” on Saturday morning, April 4th at 10:00 a.m. Chef Andrew Gruel of Slapfish returns as Guest Host.