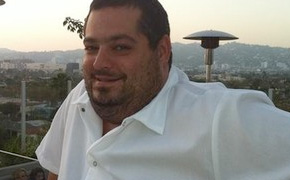 You probably recognize celebrity chef Eric Greenspan from his National Geographic Channel series, “Eric Greenspan is Hungry.” Chef Eric is also the proprietor of Greenspan’s Grilled Cheese and The Roof on Wilshire, both in Los Angeles.

Chef Eric is back on Food Network with the “Chopped All-Stars Tournament: Part 1.” It premiers on Tuesday, April 28th. Each celebrity chef is playing for the $75,000 grand prize for their favorite charity. In Heat 1 Chef Eric is pitted against Madison Cowan, Brian Malarkey and Art Smith.

In the first round, a slimy ingredient provokes some disgusted reactions from the competitors and judges. In the entrée round, the beautiful fish in the basket leads the chefs to make some surprising mistakes. And when the two finalists go in totally different directions with their desserts, it’s up in the air which approach will be more pleasing to the judges. Judges for this episode are Maneet Chauhan, Scott Conant and Amanda Freitag.

Greenspan’s Grilled Cheese just finished a very well-received three-month pop-up at Westfield Century City. A sandwich created for Century City has proved so popular that it is now on the menu on Melrose. Look for expanded hours soon.