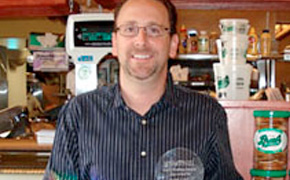 The Jewish deli business is surely not an easy one. Food and labor costs are high and the hours are long.

After being offered a management position with an existing but failing Northridge, CA deli, Ron Peskin found himself with a new title – owner. The deli’s proprietor was abandoning ship, and he proposed that Peskin should be the one to keep it afloat. Not only did the deli come with all the necessary equipment and a staff of 11, it also came with a substantial amount of bad debt. The year was 1969 and, ironically, Ron and his wife Patricia also had a son named Brent so they changed everything but the name! With little money, a handful of employees and a single delivery truck, the Peskins were determined to make Brent’s Deli a success.

Today, Brent’s Deli is still a family affair with Ron working side-by-side with son Brent, daughter and son-in-law Carie and Marc, and the recent third-generation addition of granddaughter Taylor, whose hands-on approach has catapulted Brent’s into an award-winning dining destination and catering business. Brent’s is frequented by loyal and new guests as well as celebrities and politicos who yearn for nothing more than authentic Jewish fare.

A second, larger, Brent’s was added in Westlake Village 10 years ago. Through the years Brent’s consistently remains the highest rated deli in Southern California year-after-year serving thousands of meals every day.