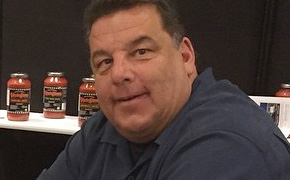 In the L.A. area they are available at Gelson’s with other retailers on the way.

Steve shares his struggles in initially getting his pasta sauces taken seriously by retail grocery store buyers. Because there are so many celebrity pasta sauces out there on the shelves that are mediocre, the buyers are resistant. Even the late Frank Sinatra had a line of jarred pasta sauces that didn’t survive the rigors of the marketplace. Schirripa’s key to success is simply getting them to try the sauce and judge it for the quality in the jar! This is why he’s resisted the temptation to put his image on the label.

“Growing up in Brooklyn, Sunday was the day you would wake up to the aroma of tomatoes, garlic and olive oil simmering on Mom’s stove as she prepared the sauce for Sunday dinner. My fondest memories are from those day, my Italian heritage and the comfort of family that I wish to share.” – Steve Schirripa