Now a tempting preview of Saturday’s over-stuffed show. With any luck we will always leave you hungry and thirsty. In our case, that’s a good thing…

The war on drugs in America may not be won on its streets – but in its kitchens. The weapon? A groundbreaking new cookbook that uses food to naturally heal brain chemistry in addicts and alcoholics. It’s called Malibu Beach Recovery Diet Cookbook and was authored by Joan Borsten. “Neuroscience has identified a link between the inability to stop using and low levels of dopamine (the feel good brain chemical that addicts crave),” says Dr. Kenneth Blum, well-known addiction scientist and father of the reward gene. “This cookbook reflects an understanding of the power of food and its potential role in enhancing neurotransmitter function.”

Restaurants in tree-lined Claremont, CA are preparing for the third annual “Claremont Restaurant Week” set for July 10 – 19, 2015. The annual Midsummer Night’s Dine will run for 10 days, including two weekends, to encourage Southern California foodies to stay overnight at one of Claremont’s five distinctive hotel properties. Jason Cerswell, Lounge 425 Manager at Hotel Casa 425 in Claremont, will provide us with the second installment of our tempting overview.

The 4th Annual I Love Poke Festival tasting event and competition returns to Orange County on Sunday June 28th at The Hilton Waterfront Beach Resort in Huntington Beach. The foodie festival and chef competition invites poke connoisseurs and newcomers to celebrate the Hawaiian delicacy, lifestyle and culture as chefs compete for the title of “Best Poke.” Producer Nino “Neens” Camilo joins us with all the 411.

The bounty of the very best in California summer produce is available. Who better to give us all the juicy details than the incomparable Robert Schueller, the Prince of Produce at Melissa’s World Variety Produce. Just try and stump him on a fruit or vegetable question! Not easy… 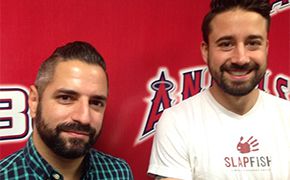 Don’t miss Guest Host Chef Andrew Gruel’s new restaurant makeover series, “Say It To My Face” on FYI. An original episode is aired every Thursday evening with an encore episode thereafter. Check your local listings. On-line food reviewers confront restaurateurs with the shortcomings of their establishments. It’s then up to Chef Andrew and his colleague, Chef Anthony Dispensa, to coach the chef and restaurateur to achieve a much higher level of guest satisfaction when the on-line reviews return for another look! Sometimes it’s tough-love…