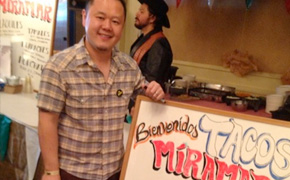 “What the Judges Said: This category nearly drove us insane because there were so many great entries, but we fell in love with this porchetta sandwich. In Italy, it’s not uncommon to find street vendors serving this elaborately stuffed and rolled pork in sandwich form, but rarely is it seen in sandwich form in this country. It’s labor intensive to prepare, but well worth the effort. Tila lays juicy white pork atop house-made jam and then adds texture with layers of crispy pork skin. What else can we say but, “Yum!” “