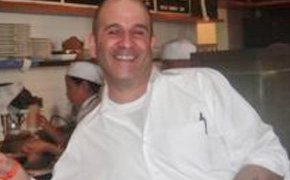 The casual, seafood centric Connie & Ted’s in West Hollywood has been a crowd-pleasing phenomenon since it opened its door two years ago.

Co-owner Chef Michael Cimarusti (Providence) is one of the most respected seafood chefs in the country. Partner Donato Poto (Providence) has a long reputation as one of L.A.’s consummate hosts. He speaks three languages.

Partner Craig Nickoloff is a veteran restaurateur best known for founding the hugely successful Claim Jumper restaurants (which he sold at their peak of popularity.) Craig knows how to feed a crowd and give them every reason to return.

Executive Chef Sam Baxter began his career with Chef Michael Cimarusti at Water Grill. Chef Baxter looks to demonstrate that the freshest seafood needs only a light touch and the simplest of preparations to make outstanding food.

At any given time the busy oyster bar showcases some 16 to 24 varieties of fresh oysters.

Connie & Ted’s opening General Manager, Matthew De Marte is our guest to share a few secrets of their incredible success. He’s a veteran of Providence.