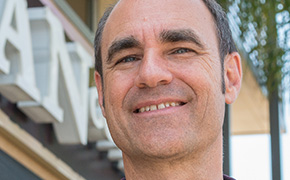 When the conversation turns to artisan coffee roasters in Orange County you always hear the name of coffeehouse visionary Martin Diedrich. He grew up in Guatemala where is Family owned a small coffee farm.

In late 2005 Martin and his wife, Karen, launched their latest retail venture Kean Coffee in Newport Beach. It’s named after their son. A location in Tustin has been added to the portfolio.

Kean Coffee has developed a loyal following of customers with its high quality artisan coffees fresh roasted onsite daily by Martin himself. The world-class roaster itself is a family affair. It’s built and manufactured by his brother, Stephen Diedrich in Sandpoint Idaho.

On the night of Thursday, August 27th Martin is hosting “A Night At The Kean Coffee Roastery” for 12 lucky guests. It’s a VIP tour of Kean’s wholesale roastery from seed to cup including a talk on coffee growing with Martin, a roasting demo, a comparative cupping, and a barista presentation during which the guests will be served espresso drinks in a similar manner as judges in a barista competition.

It’s the best of Coffee 101 with Martin Diedrich.