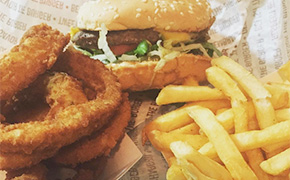 While we were waiting to connect with Matt Hood of Habit Burger Co-host Andy Harris talked about his recent meal at the Malibu Farm Pier Café on the PCH end of the historic Malibu Pier. It’s operated by a well-known Malibu area caterer, Helena Henderson. The food is simple, fresh, creative and stylishly plated. Can’t really beat the incredible beach vibe there.

The Habit Burger Grill (which started locally in Santa Barbara in 1969) partnered with No Kid Hungry for the month of September to raise funds to wipe out childhood hunger in the United States. A minimum of $200,000 will be contributed. We’ll hear the good news about the grand total…

Doing its part to help end the problem of childhood hunger in America, The Habit Restaurants, Inc. launched a partnership with No Kid Hungry in which guests were encouraged to donate at the register and, in return, received a certificate to enjoy a complimentary Charburger with cheese on their next visit through October 31, 2015.

The campaign, which ran nationwide at participating Habit Burger Grill locations through September 30, 2015, addresses the serious issue of childhood hunger in the United States where 1 in 5 children cannot count on their next meal.  During the campaign guests at The Habit who donated $2 to No Kid Hungry, a national campaign from the nonprofit Share Our Strength, received a certificate for a free Charburger with cheese good on a future visit.

The Habit/No Kid Hungry partnership raised funds from 120 Habit restaurants nationwide and donations will directly support No Kid Hungry’s mission to wipe out childhood hunger in the U.S. by connecting kids in need with nutritious food and teaching families how to cook healthy, affordable meals.

The Habit’s Chief Marketing Officer Matt Hood, joins us with all the noteworthy results.