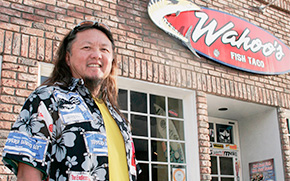 Wing Lam is well-known to Southern Californians as the personable co-founder of Wahoo’s Fish Taco. He’s affectionately known by others as “Mr. Cool.” You’ve probably seen him in his long-running Ford Transit Connect truck commercial.

He’s 3rd generation in his Family in the restaurant business. His Father emigrated from Brazil to the United States and opened his first Chinese restaurant on Balboa Island in 1970. Wing worked there initially as a busboy with very little capacity for understanding English. He grew up in Brazil speaking Portuguese.

The restaurant, New Shanghai Pine Garden, remains in operation and the property is still owned by Wing’s father, Mr. Lee. He lives nearby so he pops in regularly.

Shanghai Pine Garden serves Mandarin and Cantonese-style dishes at surprisingly affordable prices. It’s a throwback to another era but lucky for the residents of Balboa Island.

It’s a real bargain. Family Dinner includes choice of soup, appetizer, rice and one Entrée for $15.99. And this is on Balboa Island…

Mr. Lee’s Hot Sauce (a tribute to Wing’s Dad) is on the menu at Wahoo’s.

We’ll hear about this fun slice of local restaurant history from Wing Lam himself.