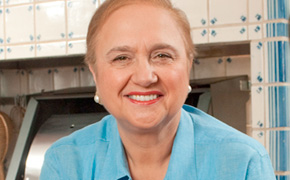 Lidia  is one of the best-loved chefs on television, a best-selling cookbook author, restaurateur, and owner of a flourishing food and entertainment business. Lidia has married her two passions in life – her family and food, to create multiple culinary endeavors alongside her two children, Joseph and Tanya. Her newest cookbook is Lidia’s Mastering The Art of Italian Cuisine written with her daughter, Tanya.

On the “SoCal Restaurant Show” we’re fans of rabbit. So is Chef Lidia. She explains why there should be a place on the American table for this beloved Italian dish. It’s available seasonally at Lidia’s flagship, Felidia restaurant in New York.

“Rabbit is one of my favorite meats; it is light, it is tasty, and it’s healthy, low in fat and easy to cook. It is not a terribly expensive meat, and environmentally it makes sense.” From Lidia’s Mastering The Art of Italian Cuisine.

When Pope Francis was in New York at the end of September, Lidia and her team had the distinct honor of cooking two breakfasts, a lunch, and two dinners for the Pope and his modest 14-person entourage. She even had coffee with him. We’ll hear about this unique experience and career highlight. This is actually the 2nd Pope she has cooked for.