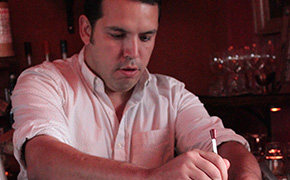 The first DINE LBC Long Beach Restaurant Week Holiday Cocktail Contest was held at The Sky Room’s Cielo rooftop lounge on November 15th. Five amateur finalists were selected (out of dozens of qualified entries) to create their concoctions in front of a panel of five thirsty judges, including the Executive Producer of the “SoCal Restaurant Show.” and noted food writer Anne Marie Panoringan (OC Weekly’s “On the Line” columnist.) 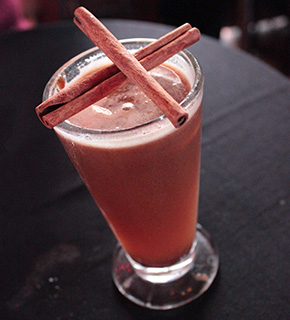 The cocktails were scored on the basis of Creativity of Ingredients, Taste/Flavor, Presentation and Likely to Order at The Sky Room. After careful deliberation the Judges’ decision for the First Place Winner was unanimous and Dan Tapia, the creator of Little Drummer Boy, joins us. The cocktail is a creative variation of a Hot Toddy. It’s his Thanksgiving Dinner specialty for a crowd.

Dan Tapia, a Navy veteran, is opening 4th & Olive in Long Beach in January. The concept for the restaurant is a Franco-German beer and wine garden serving Alsatian-inspired food. He’ll employ as many veterans as possible.