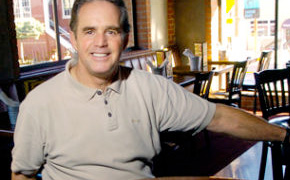 Since 1983, Rio Grill in Carmel, CA has been the place to meet friends, enjoy cocktails, food and wine and experience great dining on the Monterey Peninsula. The high energy restaurant is located at the mouth of the Carmel Valley in the well-known Crossroads Shopping Village and has won numerous reader’s choice awards and inspired food critics both near and far.

A Carmel institution since 1983, Rio Grill has enjoyed a long and storied history. Originally the site of local restaurateur Bill Lee’s “Billy Quon’s”, Rio Grill officially opened its doors almost 32 years ago. At that time, Rio Grill was part of the Real Restaurants organization, and was affiliated with such world class restaurants as Mustard’s Grill and Tra Vigne in Napa Valley, and the Fog City Diner in San Francisco.

Throughout the years, Rio Grill has continued to evolve. Expansion to the main dining room occurred on two occasions and most recently, Rio Grill completely rebuilt the Santé Fe Room, it’s special events and meeting space. Featuring an open beam ceiling and a built-in “cantina style” bar to complement an updated menu from Executive Chef Cy Yontz, Rio Grill is poised to continue to impress and satisfy both locals and tourists alike.

On the “SoCal Restaurant’s Shows’” visit to Rio Grill we particularly enjoyed the Candied Swine “JOLLY RANCHEROS” appetizer and the House-Smoked Half Chicken with mild-smoked chile butter, artichokes and potatoes. On Monday nights (the night we were there) all wines by the bottle (including a deep selection of vintages from Monterey County) are half-off.

Rio Grill is now one of three properties owned by The Downtown Dining restaurants. Managing Partner Tony Tollner, who was part of the opening team for Rio Grill joins us.

Tony managed Rio Grill from 1984 until 1991 when he and his partner, Bill Cox found the building that now houses Tarpy’s Roadhouse. In 1994, a chef/friend approached Tony and asked if he would consider another venture. From that conversation, sprung the award winning Montrio Bistro. Montrio Bistro, along with Tarpy’s Roadhouse and Rio Grill comprise the Downtown Dining group of restaurants.