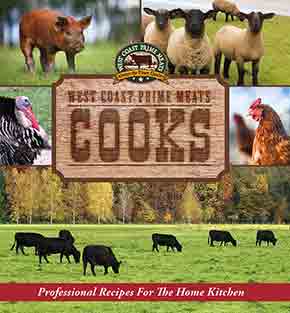 We got a tremendous response to our segment last week on the publication of the West Coast Prime Meats Cooks – Professional Recipes for the Home Kitchen cookbook. It’s the ideal gift for the serious home cook and it’s also a worthy coffee table volume. All the chefs’ recipes have been tested to be duplicated in the home kitchen. It’s available through their website at www.WestCoastPrimeMeats.com

for a modest $25.00. Five Dollars of the purchase price goes to a pair of outstanding supports groups for our Veterans, The Wounded Warrior Project and The Gary Sinise Foundation – Serving Honor and Need. It’s the Holiday gift you can feel really good about giving.

Next a mouthwatering preview of Saturday’s high-energy and appropriately festive show and not, with apologies, for dieters. If we’re doing it right we will always leave you hungry and thirsty. In our case that’s probably a good thing…

They always do it B-I-G in Las Vegas. What’s billed as the culinary event of the year, Ultimo – A Weekend of Excellence, hosted by The Venetian and The Palazzo, will take culinary extravagance to new levels, December 17th through the 20th. The highlight of the festivities will be the competition to select Team USA representing the United States in the prestigious Bocuse d’Or international cooking competition in Lyon, France in early 2017. This is the Olympics of the culinary arts.

In 2011, beer enthusiasts Meg Gill and Tony Yanow founded Golden Road Brewing to bring fresh beer to the local market in the most sustainable way possible.  “Golden Road is committed to engaging and supporting the growing community of socially-minded beer enthusiasts.” “Brewed and canned in Los Angeles,” Golden Road’s year-round offerings include Point the Way IPA, Golden Road Hefeweizen, Get Up Offa That Brown and Wolf Among Weeds IPA. Co-founder Meg Gill is our guest

Anita Lau is better known to regular listeners of the “SoCal Restaurant Show” as the Mad Hungry Woman blogger. She was living in Hong Kong in the 90s before the turnover to China. Anita is just back from a 3-week visit. We’ll get a insider’s view of the dining scene there during the glory days of the British and now under Chinese authority.

One of the up-and-coming wineries in the Guadalupe Valley in Northern Baja is Lechuza, founded in 2005. It’s owned by Ray Magnussen (with his wife, Patty) who is also the hands-on winemaker. They are Americans. We’ll meet Ray.

Our regular Guest Host, Chef Andrew Gruel of Slapfish, was just in Chicago, a great dining out city whether you’re going for high-end gourmet or great street food. Chef Andrew will discuss his finds ranging from a true Chicago hot dog experience to the best in coal-fired pizza.