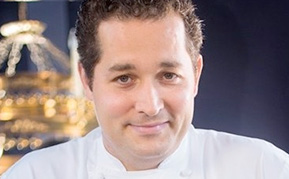 Chef James Kent led Team USA 2011 for the Bocuse d’Or, served as Competition Captain for the Team USA 2017 selection and a member of the ment’or BKB Culinary Council. Chef Kent is the Executive Chef of the acclaimed NoMad in New York City. A new NoMad is on its way to Downtown Los Angeles in 2017. We’ll meet him.

A native New Yorker, Chef James Kent started his culinary career as a summer apprentice at Bouley when he was fifteen years old. Chef Kent joined the team at Eleven Madison Park as a line cook in the spring of 2007 and was quickly promoted to Sous Chef.

In 2011, Chef Kent was chosen to represent the United States at the Bocuse d’Or in Lyon, France. After a year of intense training for this culinary competition, he placed tenth in the world. Upon returning to New York, Chef Kent was named Chef de Cuisine of Eleven Madison Park and during his time there, the restaurant received numerous accolades including three Michelin stars. Chef Kent was promoted to Executive Chef of the NoMad in the fall of 2013.