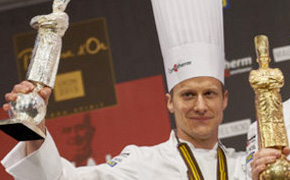 After more than a decade in the kitchens of the Thomas Keller Restaurant Group, Chef Philip Tessier led Team USA to a historic second-place finish at the Bocuse d’Or in the 2015 competition. The Bocuse d’Or is among the most demanding international cooking competitions, pitting chefs from twenty-four countries against one another in a marathon five and a half hour cooking challenge.

Chef Tessier will be the Head Coach for Team USA in 2017. Over the last several months Tessier has traveled around the country mentoring the four teams competing to represent the United States as Team USA 2017 in Lyon at the Bocuse d’Or.

Chef Tessier was also part of the distinguished judging panel of chefs on December 17th at the Venetian in Las Vegas to select Team USA 2017.