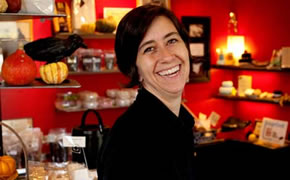 Chef Rachel Klemek will be extending the reach of her award-winning made-from-scratch baked goods when she opens a new outpost, Blackmarket Bakery on Broadway, on Saturday, January 9th, 2016 in the downtown Santa Ana’s Santora building in the Artists Village (211 N. Broadway).

Chef Klemek’s inspired approach to baking has set her apart within the county’s culinary landscape. Staying true to its roots, the new Santa Ana neighborhood bakery will highlight pastries made from her token “blackmarket” ingredients – butter, flour, sugar, and eggs.

Built in 1928, the Santora building houses the bakery’s 2,300-square-foot space, adding a “retro” feel with art-deco elements, reminiscent of simpler times. As the largest Blackmarket Bakery yet, the Santa Ana location remains family friendly as it sees the addition of new menu items, including craft beers and hard ciders. The menu will also feature a new lineup of savory “bar bite” offerings, sandwiches made with fresh-baked breads, seasonal salads and sweet and hearty brunch items (the latter of which will be coming this Spring).

Like its Costa Mesa counterpart, which opened in 2012, the Santa Ana restaurant focuses on its made-from-scratch daily retail offerings such as Chef Rachel’s artisanal breads and now-famous “eggywiches,” as well as delectable desserts, including the Total Eclipse Mousse Cake, Cookie Monster Bread Pudding, and her ever-popular Black Widow Tart. Guests will have the opportunity to indulge in Blackmarket signature cookies, including Walnut Mudslides, Peanut Butter Sandwich Cookies, and the Classic Two Tone.  “

Expanding into the Santa Ana market will allow us to serve even more of our community,” explained Chef Rachel, who opened her first Blackmarket Bakery in an industrial park in Irvine back in 2004. “The addition of craft beer and hard cider, as well as an expanded menu of family friendly favorites, gives our Santa Ana location a little something for everyone.”

Chef Rachel joins us with all the savory & sweet details.