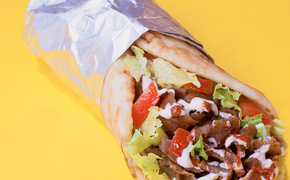 After opening its first two West Coast locations to huge crowds and an almost never-ending line, The Halal Guys are entering new territory with its upcoming grand opening in Koreatown, Los Angeles.

The fast-casual New York famed concept opened its first West Coast location in Costa Mesa last October, its second location in Long Beach this past January and have plans to bring 50 units throughout Southern California.

Known for its famous white sauce, gyro sandwiches and chicken-and-rice platters, The Halal Guys menu offers a mix of different Middle Eastern dishes. The Halal Guys aim to be different and encourage patrons across America to ditch burgers for something unique.

They pride themselves on only using high-quality products like their chicken. It has never been frozen and is marinated and seasoned overnight, then cooked and chopped on the grill and served directly to the plate to ensure a crave-worthy meal that’s piping hot. The Halal Guys’ mission is to ensure that every customer leaves happy, with a smile on their face and a satisfaction that brings them back again.

He’ll also talk about his new, soon to launch ice cream concept, Churned. The decadent ice cream is made in front of the guests in small batches and served in a fresh croissant. The churning equipment is imported from Italy. (The Italians certainly know a few things about premium ice cream.) The first location (opening later this month) will be in the Union Market at The District, Tustin.