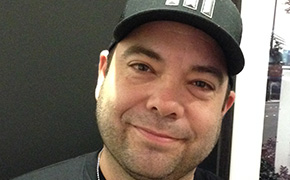 Slice Deli and Cakery opened its classic American deli and gourmet bakery last November in Fountain Valley. It’s an inspiring story of perseverance. Owners John-Michael Sanchez and fiancé Natalie Burke intended to open Slice in January of 2015. But, when Burke was diagnosed with cervical cancer that same month, they were forced to put the project on hold. In July of 2015, Burke had won her battle with cervical cancer and was eager to start working on the restaurant again.

“Sometimes you get where you need to be by losing everything,” comments Burke, who says Slice gave her hope and something to look forward to during her battle with cancer. “I refused to lose sight of our dream. Seeing a finished Slice reminds me of what I’ve overcome and all I have to be thankful for.”

Prior to her battle with cancer, Burke owned a successful custom cake business. Much like the savory items at Slice, the cakes are prepared using traditional European methods; artfully crafted from whole ingredients. The Cakery features her signature cakes served by the slice daily. Guests are also able to order customized cakes for weddings and other celebrations. The Cakery also features classic scratch-made pastries and fresh breads baked in-house daily by seasoned pastry chef, Aldo Mendiola.

The kitchen at Slice is helmed by Executive Chef Julio de Leon who focuses on classic American cooking highlighted with superior ingredients. His dishes feature humanely raised meats, locally sourced produce, and house-made ingredients. From breads to spreads, everything at Slice is made in-house daily.

In the evenings, the menu transforms to offer dishes prepared with a focus on traditional techniques. Highlights include a Porchetta Roast which features a crisped pork belly wrapped around a juicy pork loin slow-roasted for two days. Quality, house-made ingredients take center stage with dishes like the Lamb T-Bone prepared with garam masala, stout demi-glace, and mint gremolata. Slice also features a rotating selection of 20 taps with an emphasis on Orange County-based breweries as well as regional wines from the West Coast.

John-Michael Sanchez is our guest.