Jet shared his extensive adventures of the week.

On Monday and Tuesday he was in-person at the legendary commissary on the lot of Paramount Studios in Hollywood. He presented his menu for Chinese New Year there. The menus continued to be served for the balance of the week. 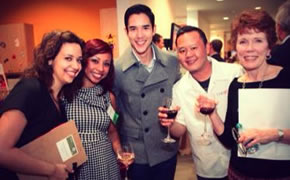 On Thursday he was the celebrity guest chef on campus at Oregon State University in Corvallis. Jet performed cooking demos, taught classes, and represented his menu on campus for Chinese New Year. Jet’s visit generated so much local interest that the TV station in Eugene sent a reporter and photographer there to cover it!

Saturday morning, before the radio show, Jet was at NBC 4 in Burbank for a cooking segment on Chinese New Year for “Today in L.A. Weekend” which aired around 7:45 a.m.

Average Betty shared a Valentine’s Day tip. She loves to dine out but she suggests Valentine’s Day is a good occasion to cook a wonderful meal at home for that special someone. Restaurants are really stressed with preparing special menus on Valentine’s Day anyway.