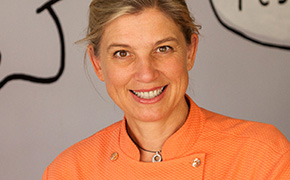 Leave it to our local celebrity chefs and Food Network favorites, Mary Sue Milliken and Susan Feniger, to have some real fun with Leap Day on February 29th at Border Grill Downtown Los Angeles. For one night only on Leap Day, Mary Sue’s and Susan’s fondly remembered CITY will return for an encore.

James Beard Award-winner Mary Sue Milliken is well-know to the audience of the “SoCal Restaurant Show.” She is a pioneer in Food TV and also the co-founder and co-executive chef of the hugely successful Border Grill restaurants (and truck) in Los Angeles, Las Vegas and Santa Monica. She is also an active volunteer for The James Beard Foundation in her prominent position on the Board of Trustees as a Board Member.

The 10th Annual Vegas Uncork’d by Bon Appetit is coming up the Weekend of April 29th. As they have been for each previous year Mary Sue and Susan are involved in a lot of the culinary events, including a Tequila tasting dinner at Border Grill in the Forum Shops on Saturday, April 30th.

For the 2nd year Mary Sue Milliken is riding in the Chefs Cycle California event to raise funds for Share Our Strength’s No Kid Hungry effort. Last year her participation raised $14,000 and the goal for 2016 is $20,000. Go Mary Sue…!