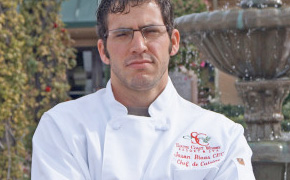 Executive Chef Jason Rivas is newly arrived at South Coast Winery Resort & Spa and the adjacent Carter Estate Winery and Resort. It’s actually an encore for him as he was on the property previously from 2009 to 2014. He’s also a Certified Sommelier. We’ll meet him.

The Carter Estate Winery has been built exclusively for the production of world class sparkling wines using the traditional Methode Champenoise process developed in the Champagne region of France. The current release is their 2012 Blanc de Blanc.

Chef Jason oversees the Vineyard Rose Restaurant at South Coast as well as the new Vineyard Grill Poolside Dining at Carter Estate. Both serve Breakfast, Lunch and Dinner. He’s also responsible for the busy banquet operations at both properties.

“Today, South Coast Winery Resort & Spa and Carter Estates is the “Diamond of the Temecula Valley.” Touting over 600 distinguished awards for the wines they’ve produced in just four years, South Coast surprised the Wine Industry further in July of 2008 when it took the coveted “Golden Bear” award from its Northern California counterparts, naming it “California Winery of the Year” from the California State Fair Wine Competition”

“It’s an honor to have South Coast Winery recognized as an outstanding wine producer among its peers of California Wineries. I’m on top of the world right now, but I didn’t do it alone. I simply set the goal to create the finest wines in all of California; then provided our incredibly talented winemakers with the tools they needed to accomplish our joint mission.

The three of us – Jon McPherson, Javier Flores, and myself — did it really. By combining their skills, with my quality vineyards, adding in some hard work, and a lot of heart, we have created the best wines in the Golden State of California.” says a smiling Jim Carter, owner/vintner. “This marks the beginning for our winery.”

South Coast Winery produces a broad portfolio of premium wines that are 10 per cent grown and produced with care under his tutelage in Southern California’s up and coming Temecula Valley Wine Country. In fact, it’s targeting to produce over 65,000 cases of award-winning wine next year under four very distinct labels: Elevation; South Coast Winery; Wild Horse Peak Mountain Vineyard; and Carter Estates.