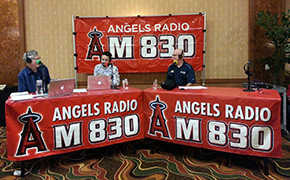 Great to see so many listeners last Saturday at the 8th Annual Pechanga Wine Festival at the Pechanga Resort & Casino in Wine Country Temecula. Thanks so very much for supporting the good work of Habitat for Humanity.

We’re going to be talking about it on March 12th but Chef Josiah Citrin is hosting an exclusive culinary celebration at Melisse in support of the ment’or BKB Foundation on Sunday. March 13th. It’s seven incredible courses of contemporary Parisian fare prepared by a dream team of six guest chefs. Reservations for the limited, two-seatings (5 and 8:00 p.m.) can be made via Open Table or by calling 310.395.0881.

Next an ear-catching preview of Saturday’s inspiringly decadent show and not, with profuse apologies, for dieters. If we’re doing it right we will always leave you hungry and thirsty. In our case that’s actually a good thing…

What’s new, and fresh, in the world of fruits and vegetables? Glad you asked. Joining us for an update is our resident Produce authority, Robert Schueller of Melissa’s World Variety Produce. For starters the incredible Ojai Pixie Tangerines are back and there is a new, distinctive Dragon Fruit from Israel that’s sweet. And wonderful grapes are now available outside of the Summer season.

Chef Jason Montelibano at EATS Kitchen & Bar at Hotel Irvine (a locals’ favorite) in Irvine is at it again culinarily speaking. He’s just rolled out an all-new Good EATS Sunday Brunch. There is an epic $14 build-you-own Bloody Mary bar and Mimosa flights. Look for the just-debuted, over-the-top menu items including Shrimp and Grits, and Cinnamon Crunch French Toast.

On Saturday evening, March 12, as part of Cochon 555 L.A., Chef Steven Fretz will be hosting, along with six other celebrity chefs, a refined three-hour culinary experience, the Chef’s Course Dinner Series, at Church Key in West Hollywood. It begins with a reception featuring a selection of passed hors d’oeuvres followed by a seated dinner and premium wine pairings. The benefit dinner is limited to 40 seats. Tickets are available online at $125 per person and 100 percent of the proceeds will benefit Piggy Bank.

Moruno, from Executive Chef Chris Feldmeier and Managing Partner David Rosoff (formerly of Mozza) is now open at The Original Farmers Market in Los Angeles. Bringing a unique style of upscale casual dining to one of Los Angeles’ historic sites, the warm, vibrant flavors of the southern Spanish inspired menu are supported by a stellar wine list focused on Spain, the deep south of France, plus various islands and volcanoes. Executive Chef Chris Feldmeier is our guest.