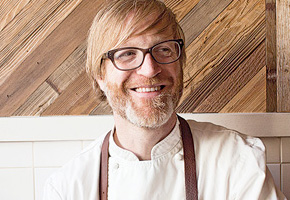 Food & Beer is a newly published, 60-recipe book from an internationally acclaimed chef/brewer duo dedicated to elevating and pairing beer with high-end dining. The debut book by Danish gypsy brewer Jeppe Jarnit-Bjergsø of the bar Tørst, and Canadian chef Daniel Burns of the Michelin-starred restaurant Luksus—both in a shared space in Greenpoint, Brooklyn where they elevate beer to the level of wine in fine dining. Chef Burns is with us to tap the keg on this unusual reference book.

With a dialogue running throughout the book, Food & Beer examines the vision and philosophy of this duo at the forefront of a new gastronomic movement. With a stunning, bold aesthetic, the design will highlight the dual visions of the authors and the spaces—Tørst, which is more rustic and relaxed, and Luksus, which is more sleek and refined.

The Foreword is by internationally renowned chef René Redzepi, co-owner of Noma, Copenhagen, the Number 3 ranked restaurant in the world.

“The chance meeting of two remarkable individuals. One of the best brewers in a generation of greats, with a good sense of business and fresh attitude, and the other a creative, driven chef with crazy food work ethics. But it also signified the start of a new style of restaurant, a place in which light, creative cooking, Michelin-star-worthy stuff, was at home with beer. I’m pretty sure that individually both would’ve succeeded in their own right-Jeppe creating great brews, and Daniel with a Michelin star or two doing something else-but together I believe they’ve created something truly special. Something new.” —René Redzepi (from his foreword).