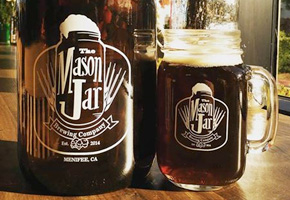 One of the smallest craft breweries participating in the Pechanga Microbrew Festival is Mason Jar Brewing in Menifee founded in 2014. It’s the creation of the determined husband and wife team of Robert Carter and Grace Santiago. They transitioned into becoming a production brewery from their hobby as passionate and award-winning home-brewers.

Husband and wife team, Robert Carter and Grace Santiago, are active and participating residents of Menifee, California. Robert, a home inspector/youth football coach and Grace a local Real Estate agent, have both found their true creative calling in brewing beer.

Their tagline : “Life and beer have one thing in common…Chill for Best Results!”

Now, they have launched their next dream. . . Menifee’s first Craft Brewery! Locally known for their homebrew, Robert and Grace have won 22 medals out of 24 competitions entered over their last two years as home brewers for their delicious traditional and dessert inspired beers.

The most recent medal won as home brewers (2014) was in the fruit beer category at the National Homebrew Competition (NHC). At NHC, they took home a GOLD medal for their dark chocolate, raspberry, coconut stout besting hundreds of competitors.

Last year at the Microbrew Fest their Coco Loco attracted long lines until it was gone. It’s a refreshing coconut-lime pale ale.

Currently on tap is their signature IPA. It’s characterized by nice citrus notes, a slightly dry finish and is incredibly tasty! 7.2% ABV and 58 IBU.