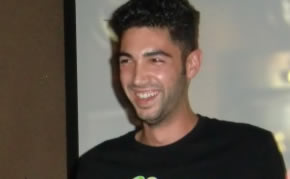 Daniel Shemtob is the founding entrepreneur of The Lime Truck, one of the pioneering food trucks in Orange County. There are now 2 popular Lime Trucks making the rounds in the OC in addition to a truck serving Los Angeles and environs. A fourth truck is used for catering and special events.

Daniel and his colleagues were part of Season 2 of Food Network’s “Great Food Truck Race.” In a spirited, cross-country competition The Lime Truck bested the Hodge Podge truck from Cleveland in the finale. The prize was a cool $100,000! Daniel only had one truck at the time “Great Food Truck Race” was in production so he created a 2nd truck for the competition so The Lime Truck was still on the road in Orange County during the 8-weeks he was gone. Incredibly the new truck was delivered the first day of production and hadn’t been previously tested!

One thought on “Show 18, February 23, 2013: Daniel Shemtob of The Lime Truck and TLT Food in Westwood Village”