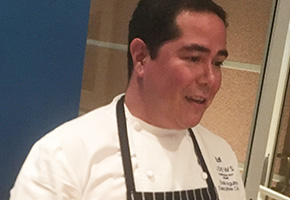 The Loews Coronado Bay Resort is situated on a private 15-acre peninsula surrounded by the Pacific Ocean and Coronado Bay. Executive Chef Chris Aguirre joined the property earlier this year in March. Most recently he was at the Four Seasons Hotel San Francisco.

He oversees all of the resort’s restaurants including Mistral Restaurant, the Market Café, Market to Go, the Cays Lounge, the Cantina Restaurant, banquets and room service. We’ll meet him.

Aguirre has deep roots in the restaurant industry. His grandmother ran a steakhouse in Texas during the Great Depression along with a speakeasy – so it could be said he was born for the culinary world. Growing up in Los Angeles with three brothers, he developed a passion for food at a young age. “We were all big eaters and loved to hold cooking competitions to see who could make the best dish in the house,” recalls Aguirre. His dad, a foodie himself, always held the position of official “taste tester.”

Aguirre found himself in professional kitchens at the young age of 15. After high school he soon realized his true passion was in the kitchen. He graduated from the Art Institute of California, Los Angeles, and worked at a variety of Southern California restaurants including the St. Regis Hotel before moving to Texas.

There, he worked closely with Jean Georges Vongerichten at Bank – a formative experience in his culinary career. “Working with Jean Georges greatly influenced my style of cooking. I believe in sourcing the best ingredients you can, and from there, just keeping it simple – allowing the true natural flavors shine through,” said Aguirre.