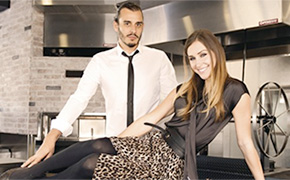 The (greatly respected and always trendsetting) Union Square Hospitality Group (Union Square Café, the Modern, North End Grill…) in New York initiated a policy of “no tipping” earlier last year. The gratuity is included in the menu pricing. The concept is an effort to resolve the inequality in the compensation of the Front of the House Staff versus the hard-working kitchen staff who are not tipped.

The DirtytSexyHappiness Hospitality Group tried this in ARC and Restaurant Marin at SoCo in Costa Mesa. We’ll chat with proprietors Chef Noah and Marin von Blom to see how this innovation has worked out in their properties.

It’s been a great year for Restaurant Marin. Restaurant Critic Brad A. Johnson of the Orange County Register awarded Noah Blom and baker Christy Henry “Pastry Chefs of the Year” honors. Also the Marin Fries were one of Brad’s “The Best Thing I Ate This Week” in 2016.

They are also about to open their 3rd concept at SoCo, The Guild Club. We’ll get a preview.