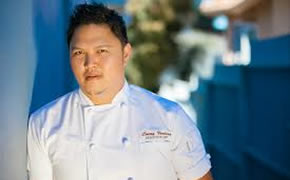 Chef Cocoy is an authority on Filipino cuisine and consults for Island Pacific Supermarkets, a California grocery chain specializing in Filipino fresh ingredients and food products.

Recently Chef Cocoy led a tour of the Island Pacific Supermarket on Vermont Ave. for the Culinary Historians of Southern California that was covered by Filipino TV. Chef Cocoy explained the cultural influences on their food and how it varies regionally throughout this Island nation. He also provided the culinary 411 on a couple of the best known dishes including lumpia (egg roll) and adobo (typically marinated meat.)