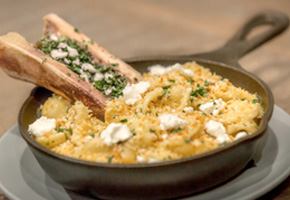 Bone Marrow is increasing in prominence on restaurant menus. You’ll frequently see it as an appetizer or as an accompaniment as part of an entrée.

Locally, for example, the new Recess Room in Fountain Valley has Bone Marrow Mac & Cheese and the Bone Marrow Burger on their menu.

The Bromberg Brothers in Soho popularized bone marrow in the early 90s at Blue Ribbon Brasserie with their signature appetizer of Bone Marrow & Oxtail Marmalade.

Our resident Meatheads from West Coast Prime Meats, Terry Hanks and Jay Henderson, will provide us with the rich 411.

The Meatheads explain that bone marrow has the same umami qualities of foie gras but is far more economical. It also has more healthful qualities (in moderation) than you’d probably imagine.