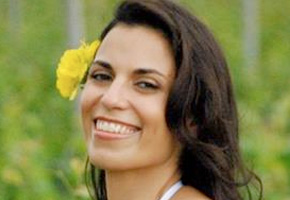 Since she was a young girl, Julie Ann Sageer, lovingly called “Julie Taboulie” by her close-knit family, has been passionate about preparing and cooking the traditional food of her Lebanese heritage. And now she shares that passion and knowledge with you in her first cookbook, Julie Taboulie’s Lebanese Kitchen – Authentic Recipes for Fresh and Flavorful Mediterranean Home Cooking, the perfect companion to her Emmy-nominated PBS shows.

Julie established her mark in the culinary world by making television history in 2012 with producing and premiering her Emmy-nominated and multiple award-winning national Public Television cooking show series Cooking with Julie Taboulie. The series become the first, and only, Lebanese cooking series to air in the United States and Canada.

Julie Ann Sageer continues to be the most pivotal pioneer, public figure and personality to motivate the movement of making Lebanese cuisine mainstream across America, with her brand-new Public Television series Julie Taboulie’s Lebanese Kitchen airing on PBS stations nationwide. This special series brings to life her love of her Lebanese culinary and cultural heritage in a celebration of all things Lebanese cuisine.