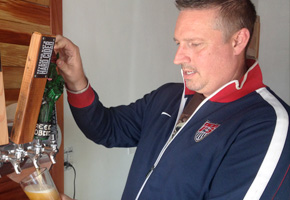 “A social house where fine food, craft cider and mead set the stage for conversations between old and new friends alike, Great Society has the largest selection of craft cider and meads in all of Southern California. Featuring 20 draughts and more in bottles, our extensive cider and mead list showcases craft producers from nearly every corner of the world. You’ll find flavors and profiles ranging from sweet to sour, still to sparkling, barrel-aged to hopped, rare to near-impossible to find.”

“Complementing this incredible list, our food menu fuses seasonal offerings with unexpected spicing to create dishes that don’t just taste great, but pair well with whatever profile you choose. Try our signature burger with an unfiltered whiskey barrel-aged cider from Michigan; or an artisanal cheese plate with a tart, lightly sparkling Sidra from the Basque region of Spain. There’s a variety of pairings to tantalize your taste buds.”

“With its origins lost in history, cider remains the most noble of beverages, having played a role in Old and New World alike. These ancient elixirs, fermented mainly from apples, have been the drink of kings and presidents, farmers and the working class. Though its fortunes have occasionally wavered, cider’s incredible diversity, and close connection with the land, has led to an amazing renaissance. Cider is a beverage that deserves homage and we are the first restaurant and taphouse in Southern California to feature it!”