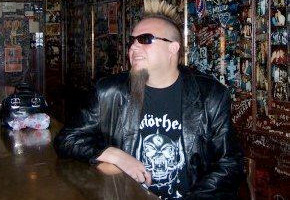 Journalist Al Mancini is well-known in Las Vegas hospitality circles. He’s been reviewing restaurants there for over 15 years. In 2011 he co-created the first edition of the definitive Las Vegas dining guide – Eating Las Vegas – The 50 Essential Restaurants. Late last year he joined the Las Vegas Review-Journal as a staff writer primarily covering the food, restaurant and libations beat.

We’ll chat with Al about the rise of Downtown Las Vegas as a dining destination and also get updated on other local foodie news of note.

One of Al’s picks for Downtown Las Vegas dining is The Carson Kitchen. It’s actually expanding. It’s something of a homage to its founding chef/owner, the late Kerry Simon.

Al is also a brunch fan. Right before his “SoCal Restaurant Show” interview he was at the newly expanded Ping Pang Pong in The Gold Coast enjoying their highly regarded dim sum. On Friday he was brunching at Sugarcane located on The Strip at The Venetian. Al points out that it’s one of the few spots in Las Vegas with a Weekday brunch option.